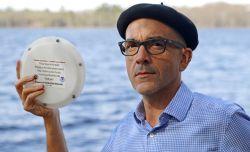 Nico Wienders has been working as part of the Florida State’s Earth, Ocean, and Atmospheric Science (EOAS) department to figure out what causes the Gulf Stream to separate from the American coast (specifically at Cape Hatteras). This separation can have huge implications in terms of climate for northern states in the U.S, Canada, and Europe.  The search for an explanation for this phenomenon has been ongoing for several decades within the oceanographic community; with no real satisfying answer having ever been proposed. Until recently, when Drs. Deremble, Dewar, Schoonover, and Wienders conducted studies as part of an NSF grant. After exploring different hypothesis, they came back to ideas that had been proposed by Melvin Stern, former FSU faculty and member of the National Academy of Sciences. While many had previously believed the separation to be connected to the topography at the surface near Cape Hatteras, Stern’s theory instead focused on the convergence of deep isobaths at the location of separation.

Utilizing RCC’s High Performance Computing (HPC) Cluster, Dr. Wienders and his colleagues used the Massachusetts Institute of Technology General Circulation Model (MITgcm) to simulate the ocean circulation while coupled with the atmosphere. They extended Stern’s theory, developing it for a stratified fluid instead of anhomogeneous fluid. Dr. Schoonover, as part of his doctoral work, was able to prove that Stern’s ideas are valid in providing a proper justification for the Gulf Stream separation. Just recently, Dr. Wienders and his colleagues received a new grant to further explore their research of the Gulf Stream separation, at even higher spatial resolutions.

According to Dr. Wienders, the RCC and its resources play a vital role in the continuation of research like this. “With the RCC staff and facility, we were able to set up our experiment, scale it up and eventually export it to bigger installations to finalize our work.” Before the availability of the RCC facilities, there was not enough computing power to conduct this kind of research. Florida State’s HPC is also very heavily used by Dr. Wienders to study the evolution of multiphase plumes in the deep ocean, a phenomenon observed during the recent oil spills in the Gulf of Mexico.